KAMLOOPS, B.C. (March 20) -- Reigning women’s Olympic trampoline champion Rosie MacLennan of Toronto booked her ticket to the 2016 Summer Games in Rio de Janeiro with a convincing victory on Sunday at the Canada Cup.﻿ 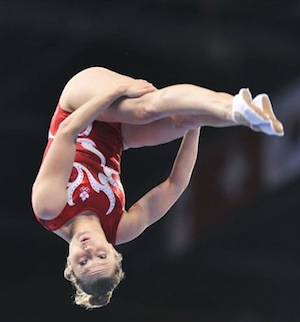 “Things went a little bit better in the final today than in the prelims but there’s still a lot of room for improvement,” said MacLennan.

“My height was a little lower than what I ultimately want it to be but consistency and stability were my main priorities.”

MacLennan, who earned one spot in Rio for Canada in women’s trampoline with her fourth-place finish last fall at the 2015 world championships, clinched the Olympic spot for herself after building up an insurmountable points lead after three of four selection events for Canadian team members, including the Canada Cup.

“We’re very happy Rosie has secured her place to represent Canada at the Olympics, this summer in Rio,” said Stephan Duchesne of Montreal, Canadian high performance director for trampoline gymnastics.

“Rosie went through some tremendous challenges in the past year and she is now back on the right track.”

While MacLennan can now shift her focus to ramping up her routines for the Rio Games, nine-time Canadian men’s champion Jason Burnett’s hopes of competing at his third straight Olympic Games got a big boost after winning the men’s Canada Cup title with a dominant performance.

Burnett, who competes next month at a last-chance Olympic qualification meet to win a spot for Canada in men’s trampoline, cruised to the gold medal with 161.020 points, more than 10 points ahead of runner-up Nathan Shuh of Toronto with 149.670. Curtis Gereinn of Kelowna, B.C. placed third at 148.175.

“I was feeling much more comfortable and confident in my final routine today,” said Burnett.

“I still struggled with the last three skills but the majority of the routine was clean and a little bit higher than in the prelims.”

Burnett’s top priority now is to fine tune the routine he hopes will clinch the Olympic berth for Canada at the final qualifier in April.

If the 2008 Olympic silver-medal winner earns the berth for Canada he will be awarded the spot at the Rio Games based on his performance at three selection events held so far for Canadian team members.

“Jason did what he needed to do to get the necessary points to give himself  a comfortable edge to secure his place at the Olympics,” said Duchesne.

“His next task is to go and get this place for Canada next month in Rio.”

In other senior finals at the Canada Cup Jon Schwaiger of Burlington, Ont., won bronze and silver respectively in men’s tumbling and double mini-trampoline (DMT) while Tamara O’Brien of Vancouver won gold in women’s DMT and Arden Oh of Calgary took the bronze.
﻿﻿