MONTREAL (June 17, 2021) - Gymnastics Canada and the Canadian Olympic Committee announced Canada’s artistic gymnastics team nominated to compete at the Tokyo 2020 Olympic Games at an event held at Parc Olympique in Montreal on Thursday. 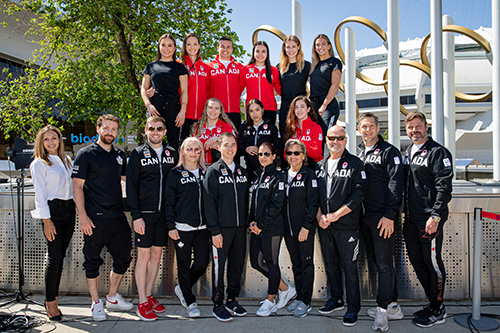 The women’s artistic gymnastics team will be led by Ellie Black of Halifax, N.S. who will be competing in her third Olympic Games, along with her Rio 2016 teammate and 2018 World silver medallist on vault, Shallon Olsen, from North Vancouver, B.C. Joining the Olympic veterans will be Brooklyn Moors of Cambridge, Ont., and Ava Stewart of Bowmanville, Ont., who will both be making their Olympic debuts.

“I am beyond thrilled and proud to be representing Canada at my third Olympic Games,” said Black who had a best-ever Canadian result in the all-around competition at the Rio 2016 Olympic Games, finishing fifth, and who also captured a silver medal in the same event at the 2017 World Artistic Gymnastics Championships. “I am grateful for the opportunity to head to Tokyo with this great team to show what we can do. We have some new fresh energy on this team along with experience so I think it’ll be exciting for all of us. I’m very proud of all the girls on our Canadian team – this past year wasn’t an easy one but together we overcame, persevered, adapted, and supported one another to get to this point.”

Black was also Team Canada's flag bearer at the Lima 2019 Pan American Games Closing Ceremony, after winning five medals to become Canada's most decorated Pan Am Games gymnast with ten medals, including five gold from the 2015 and 2019 Games.

Canada qualified the women’s team for Tokyo 2020 by finishing fifth in the qualifying round of the 2019 World Artistic Gymnastics Championships in Stuttgart, Germany in October 2019 where there were nine team berths available to be claimed.

In men’s artistic gymnastics, Canada will be represented by René Cournoyer of Repentigny, Que. who earned his spot for Team Canada by virtue of his 43rd place finish in the all-around competition at the 2019 World Artistic Gymnastics Championships.

"After an incredibly long wait, we are finally reaching the end of the crazy emotional rollercoaster that was this past year,” said Cournoyer, the 2018 Canadian all-around champion who has represented Canada at every World Artistic Gymnastics Championships and major multi-sport games since being named to the senior national team in 2015. “There is no doubt that these Games are going to be quite different, but that's also what is going to make them so unique and memorable and while I will be the only Canadian male artistic gymnast in Tokyo, I know that I'll have my teammates, my family, and the whole nation with me, supporting me from home.”

Tokyo 2020 will mark the first in-person competition for all of the athletes nominated to the team since early 2020. Gymnastics Canada has been holding virtual competitions for the last year to accommodate the various shutdowns across the country due to the COVID-19 pandemic.

"This team is sure to capture the imaginations of a generation of young Canadian gymnasts," said Team Canada's Tokyo 2020 Chef de Mission, Marnie McBean. "For so long, Canadians have watched the Olympic gymnastics events be dominated by other nations - it’s so awesome to see our Canadian team, anchored by Ellie Black, establishing that they are a force to be reckoned with!"

The athletes and coaches nominated are:

The coaches nominated are:

Prior to being named to Team Canada, all nominations are subject to approval by the Canadian Olympic Committee’s Team Selection Committee following its receipt of nominations by all National Sport Organisations.