CALGARY, AB (February 9, 2020) – Ana Padurariu from Gemini Gymnastics in Oshawa, ON held on to her Elite Canada all-around champion crown on Sunday at the Genesis Centre in Calgary, AB as she topped the podium in the senior division for the second year in a row at the Elite Canada in Women’s Artistic Gymnastics competition. Maya Zonneveld from Revolution Gymnastics in Waterloo, ON took the junior all-around title. 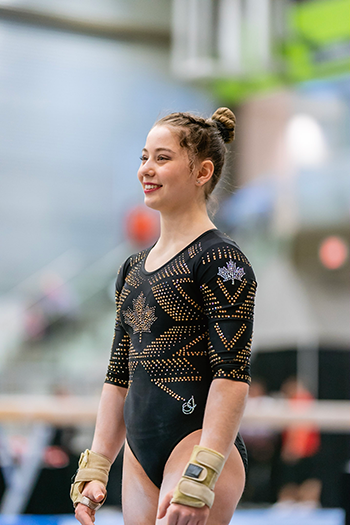 Padurariu was leading after the first day of competition on Friday and managed to retain her lead after laying down another solid beam routine on Sunday to win the all-around title with a two-day total score of 106.865. She also captured gold on beam and silver on floor.

“This weekend definitely went better than I expected. It was a rough ride coming in here, but a lot of work was put in with my coaches Elena (Davydova) and Valery (Yahchybekov), and my whole support system, and I was able to come out and compete all-around for the first time since nationals which was a pretty big accomplishment to just stay healthy and to get through the fatigue of doing a whole competition again,” said Padurariu who injured her foot just before the Pan American Games last summer.

Brooklyn Moors from Dynamo Gymnastics in Cambridge, ON captured the silver medal in the all-around with a total score of 106.414, with a stunning new pass added to her fan favourite floor routine, which saw her capture gold on that event as well as silver on bars and beam. Rio 2016 Olympian Isabela Onyshko from Phoenix Gymnastics in Vancouver, BC took the bronze with a total score of 103.981, while also capturing bronze on bars and floor.

“I’m overall really pleased with how today went. I completed my floor routine today – it wasn’t as clean as I hoped, but I’m just happy I made it through because I just wanted to test it out before going to the American Cup,” said Moors who will head to that important all-around World Cup in Milwaukee, USA on March 7th. “I’m feeling more confident for that competition now after this weekend because I have been battling injuries, and I wasn’t sure where I stand, but I feel a lot better now.”

Ellie Black from Halifax Alta Gymnastics in Halifax, NS won gold on the uneven bars, and finished fourth on beam – the only two events she competed at this competition as she makes her return to competition following an injury to her ankle at the World championships last year. Mia St-Pierre from Gym-Fly in Châteauguay, QC took the other apparatus gold on vault.

Shallon Olsen from Omega Sports Centre in Coquitlam, BC, the 2018 World silver medallist on vault, jetted back to Canada from school in Alabama to compete on vault and bars on Sunday – laying down the highest score of the day on vault, and finishing a respectable eighth on bars – an event she rarely competes.

The junior competition, which took place earlier in the day on Sunday, was thrown wide-open early on in the first rotation, when Day 1 leader Clara Raposo from Manjak’s Gymnastics in Mississauga, ON fell on her second vault and injured her knee, forcing her to withdraw from the competition. With the door open, it was Zonneveld from Revolution Gymnastics in Waterloo, ON who seized the opportunity and claimed the junior all-around title with a two-day total score of 99.831. She also captured silver on floor, and bronze on beam.

Cassie Lee, Raposo’s teammate from Manjak’s gymnastics, claimed the silver medal in the all-around with a total of 99.231 – including winning gold on beam and bronze on floor. Ava Stewart from Gemini Gymnastics in Oshawa, ON rounded out the junior all-around podium, taking bronze with a total of 98.598.