TOKYO, JPN (December 5, 2019) – Gabriella Flynn of Burnaby, BC climbed to the top of the podium in women’s 17-21 double mini-trampoline (DMT) to start the 2019 Trampoline Gymnastics World Age Group Competitions off with a bang on Thursday in Tokyo, JPN. Zachary Blakely of Edmonton, AB also captured bronze in men’s 17-21 DMT. 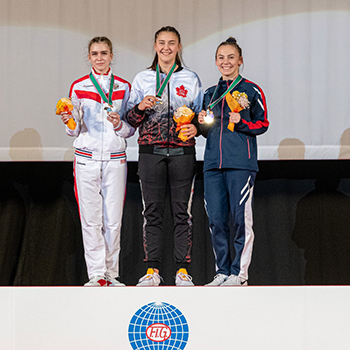 Flynn, who trains out of Shasta Trampoline and is competing in her first World Age Groups, had entered the finals in second position, and laid down two great passes in the final to score 66.700 and win the gold medal. Luliia Petrova of Russia took silver with a score of 66.200, while Mikaela Hunter of the USA took bronze with a score of 65.900.

“I was really surprised with how the finals went considering how my warm-up went,” said Flynn who will also compete in individual and synchronized trampoline at this competition. “This is definitely unexpected, doing this for the first time. I was nervous going into this, but now I know I can be nervous and still compete well which will help for my other events.”

“I was really calm, but very stressed at the same time. I came in knowing I could do my passes for sure, but the energy, and the excitement from the crowd, was quite unlike anything I’d seen before, so it was something I had to get used to, but I loved it,” said Blakely who will also compete in individual and synchronized trampoline later in the competition. “This is most proud I’ve ever been – I felt so proud to represent Canada. I have a lot more confidence now for my other events.”

Antonio Fernandes of Calgary, AB finished 12th and David Dawson of Comox, ON finished 22nd. Isiah Klassen of Niverville, MB unfortunately did not finish the competition.

In other qualification action today was women’s 15-16 tumbling where no Canadians advanced to the finals, but Emily Harrison of Oakville, ON was Canada’s top finisher in 10th. Taylor Pillinger of Cambridge, ON finished 15th, Helen Dong of Mississauga, ON finished 16th, and Abby Thompson of Calgary, AB finished 30th.