OSHAWA, ON (July 28, 2019) – The 2019 Canadian Championships in Trampoline Gymnastics wrapped up on Sunday after three and half days of intense competition spread over the disciplines of trampoline, synchro trampoline, double mini-trampoline (DMT), and tumbling. 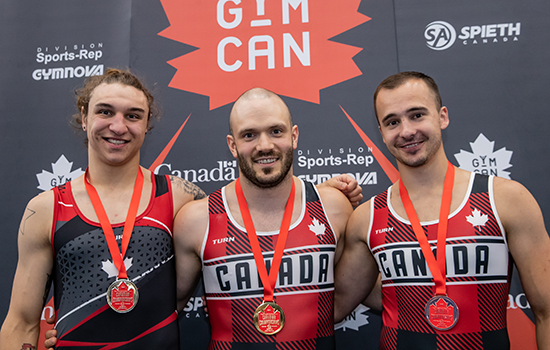 “The competition went really well. We’ve been experimenting with my routines, and this was the first time I’ve gotten to compete them,” said Smith. “They went really well so I’m really happy. My parents were here to watch me, as well as my amazing teammate Tamara O’Brien, which was awesome. For Pan Ams, I want to do the exact same routines and maybe go a bit higher with my compulsory routine, but just do the same thing and compete really nice, clean routines.”

In the men’s trampoline competition, 2019 Pan Am Games-bound athletes Jérémy Chartier of Montreal, QC and Jason Burnett of Toronto, ON were ranked one and two heading in to the finals, but both faced some difficulties in the finals and ended the day off the podium. 2015 Pan Am Games gold medallist Keegan Soehn of Red Deer, AB took the gold, followed by Benjamin Lagacé of St-Mathieu-de-Beloeil, QC, and Jake Cranham of Toronto, ON with silver and bronze respectively.

Chartier joined with Soehn to capture gold in the men’s senior synchronized trampoline competition, while Gabrielle Briand-Brière and Laurence Roux of Quebec took gold in the women’s synchro competition.

Jon Schwaiger of Caledonia, ON repeated his double gold-medal performance from 2018, taking gold in both senior men’s tumbling and DMT for another year.

“The competition went pretty well for both,” said Schwaiger who captured his eighth-consecutive senior tumbling title this weekend. “I went four for four on both (apparatus) which is really all you can hope for, and I also set a new difficulty record on DMT on my first pass. Looking forward to Worlds, my plan is to just clean up some of my passes, and up the difficulty in the straight passes and just get them more confident and consistent.”

“I did the passes I’ve been working towards for this competition, and so now I’ll be working to clean them up and make them a little bit better for Worlds,” said Sugrim who has captured the Canadian senior title five times. “My highlight was competing a full out straight in the middle (of my passes) again, because I haven’t done that in two years -- so I was really excited to complete that in both prelims and finals.”

In senior women’s DMT it was Jordyn Miller-Burko of Toronto, ON, who also trains out of Dynamo Gymnastics, taking the title. She was first heading into the finals, and retained her lead to win her second consecutive senior DMT title.

“I think I made some strides since Elite Canada this spring, and I think there’s still a lot to work on for World Championships. I hit a new high score in the prelims which was definitely a highlight.”

The World Championships in Trampoline Gymnastics take place from November 28 to December 1 in Tokyo, JPN, and will be the next major competition for most of these athletes.