LIMA, PER (July 31, 2019) – Brooklyn Moors of Cambridge, ON captured Pan American gold on the floor exercise to close out the 2019 Pan American Games on Wednesday in Lima, PER while Ellie Black of Halifax, NS captured her fifth medal on beam – a silver, and finished fourth on floor. 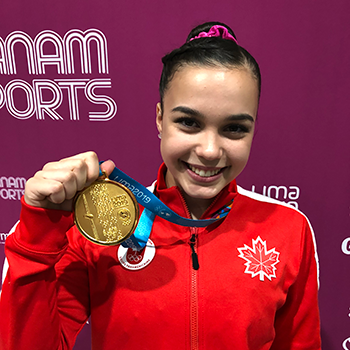 Black started off the day competing in the beam finals where she corrected the fall she had during the team competition, and scored a 13.566 to take the silver medal behind Kara Eaker of the USA who scored a fantastic 15.266 to claim the gold medal. American Riley McCusker took the bronze medal with a score of 13.333.

There was little rest for Black after receiving her medal as she had to rush right back out to compete in the floor exercise finals where she again corrected the error in her second pass that saw her step out of bounds in the all-around competition, and laid down a score of 13.433. She was sitting in third position right up until the last competitor – her teammate Moors, who took to the floor and performed beautifully to win the gold medal with a score of 13.900, pushing Black back into fourth position.

“I was really excited for Brooklyn," said Black following the floor competition where it took an agonizing 10 minutes for Moors’ score to finally be broadcast. "I wasn't really thinking about myself, I was thinking about her.”

When asked about her silver-medal winning beam performance, Black commented: “It’s incredible to come away with one more medal. It’s great for this team that we’ve done so well. It’s bringing some excitement and confidence as we build towards the world championships this fall.”

For Moors, who is known internationally for the grace and emotion she brings to her floor routines, this gold medal was pretty special: “"I've been trying for so long, just working so hard in the gym for years now, and to finally come out on top like this is pretty crazy. I think this gives me the extra confidence boost that I need to keep working forward. This is pretty special for sure.”

In the men’s apparatus finals, Sam Zakutney of Ottawa, ON had the top result of the day, just missing the podium in the horizontal bar finals and finishing fourth with a score of 13.966. His teammate René Cournoyer of Repentigny, QC scored a 13.833 to finish just behind Zakutney in 5th position. Francisco Barretto of Brazil took the gold with a score of 14.566.

“I’m really happy with how the routine went,” said Zakutney who was crowned the senior all-around champion at this year’s Canadian Championships. “I don’t think I could have done any better than I did today, and the cards fell where they did. I’m pretty happy with how I performed, and I think I finished off my Pan Am Games on a pretty good note for myself.”

Justin Karstadt of Toronto, ON was the lone Canadian to compete in the parallel bars finals where he finished sixth overall with a score of 13.233. Isaac Nuñez of Mexico took the gold with a score of 14.433.

“Ever since I was little I’ve dreamed of competing in a major final like the Pan Am Games, and I was especially motivated after the Toronto Pan Am Games,” said Karstadt. “Just to be here living my dream is amazing for me. I’m very proud of my performances from the team final and my only goal was to help Canada earn a medal, which we’ve done.”

Ellie Black also becomes Canada’s most-decorated Pan American gymnast with her total of 10 medals from 2015 and 2019.