LIMA, PER (July 29, 2019) – It was a double medal day for Canadian gymnastics on Monday with Ellie Black of Halifax, NS repeating as the women’s individual all-around champion, and Cory Paterson of Montreal, QC claiming the men’s team’s first individual all-around medal – a bronze, since 1999. 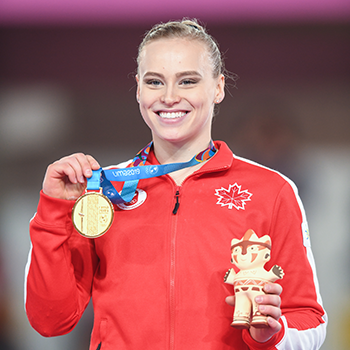 Black started off the day with a stuck vault that scored her the day’s highest score on vault – a 14.450, and then followed up with another high score for the day on the uneven bars with a 14.300. She had a healthy lead over Riley McCusker of the USA heading into the balance beam, which she retained with a score of 13.900 as they moved onto floor. Black had the crowd on the edge of their seats when she stepped out of bounds on her second pass, and scored a 13.900. McCusker laid down a fantastic routine to score a 14.200, but it wasn’t enough to stop Black, despite an appeal, and Black took the gold with a total score of 55.250.

McCusker took the silver with a total score of 55.125, while Flavia Saraiva of Brazil repeated her bronze medal-winning performance from 2015 with a score of 54.350.

“I’m feeling really excited and really good,” said Black who becomes the first female gymnast to win back-to-back Pan American titles in the all-around. “It was a great competition – I had a small hiccup at the end on floor, but it’s an awesome experience to have. This is a new floor routine, so to be able to go out there and get that experience and to be able to learn from that, and get better and stronger as we move towards worlds, is really valuable.”

Victoria Woo of Brossard, QC was the other Canadian in the finals, and finished a very respectable eighth overall with a score of 51.250: “This was my first experience in an all-around final, and I’m proud of myself because I stayed put together even though I had a few mistakes on floor. I cleaned up my mistakes on bars and beam from the first day of competition so I’m really proud of that.”

In the men’s all-around final later in the day, it was a battle between the two Canadians – Paterson and René Cournoyer of Repentigny, QC, and the two Brazilian athletes – Caio Souza and Arthur Mariano. They traded position throughout the competition, and eventually settled into Souza taking the gold with a total score of 83.500, Mariano taking the silver with a score of 82.950, and Paterson taking bronze with a score of 82.200. Cournoyer finished just off the podium in fourth with a score of 82.075.

“I feel incredible - I went out there a little nervous, but managed to hit all six events which I don’t remember the last time I’ve done, so that’s just an incredible feeling that I did it on the right day,” said Paterson. “Rene supporting me and competing at the same time really helped. I always feel this need to beat Rene – it’s a friendly competition, so it helps us push each other, but we also have each other’s back, so having a teammate in the same rotation just brings that extra energy and that extra support.”

For Cournoyer, it was bittersweet to finish just off the podium, but increased his confidence for the team as they look towards the World Championships and qualifying for Tokyo 2020 this fall: “I’m super excited, Cory had an incredible day, he deserves it 100%, and to be fourth – I couldn’t ask for more. Pommel horse was a real highlight – I’ve had two hits in a row on that apparatus, and Cory did too - it’s just really satisfying to work so hard and to succeed.”

Cournoyer is back on Tuesday to compete in the rings apparatus finals, and will also compete in the horizontal bar finals on Wednesday along with Sam Zakutney of Ottawa, ON. Tuesday will also see Zachary Clay of Chilliwack, QC and Justin Karstadt of Toronto, ON compete on pommel horse, Black competing on both vault and the uneven bars, and Brooklyn Moors of Cambridge, ON competing on bars.

The competition will wrap up on Wednesday with the horizontal bar final for the men, along with Karstadt competing on parallel bars, and for the women – Black competing on both beam and floor, and Moors on floor.