QUEBEC CITY, QC (February 4, 2018) – Gymnastics Canada is honoured to announce our award winners in women’s artistic gymnastics for 2017. The winners were presented with their awards on Sunday afternoon as part of the 2018 Elite Canada competition taking place at Telus Stadium in Quebec City. 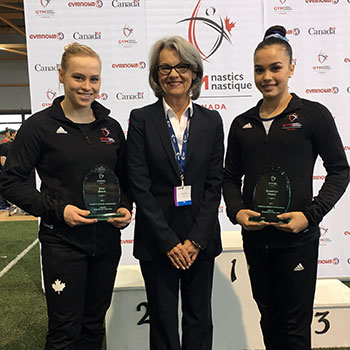 Ellie Black from the Halifax Alta Gymnastics Club in Halifax, NS, and Brooklyn Moors from Dynamo Gymnastics in Cambridge, ON, headlined Canada’s women’s artistic gymnastics team at the 2017 FIG World Artistic Gymnastics Championships this past fall in Montreal. Both qualified for the women’s all-around finals where Black took the silver medal in an historic Canadian best-ever performance. Black also narrowly missed the vault podium finishing 4th and finished 7th in the floor finals and 8th on beam.

QUOTE: “It was an incredible year for Canadian gymnastics, and to just be a part of that and to represent my country with the maple leaf on my chest is the best feeling when you go out there. So I’m very thankful for those opportunities and I want to continue to help push Canadian gymnastics higher.”

Moors, who made her senior debut in 2017, finished 15th overall in the all-around final in Montreal and also placed 5th on floor. Moors also took home the prestigious Longines Prize for Elegance at the event.

QUOTE: “This year I trained my hardest, so it’s good to know that the hard work pays off in the end.”

As a former two-time Olympic gymnast, David Kikuchi, along with Lorie Henderson, was the head team coach at the 2016 Olympic Games in Rio. He also coached at the Commonwealth Games in 2014, and the World Championships in 2013, 2014, 2015, and 2017. Keiji Yamanaka has been coaching in Halifax for over 30 years and was Ellie Black’s first coach in the sport.

Saadi, originally from the former Soviet Union, was a member of the gold-medal winning Russian team at the 1972 and 1976 Olympic Games, and also placed in the top-10 all-around at both Games. She moved to Canada in 1991 and opened her club – Dynamo Gymnastics in 2011. She has coached three athletes to the Olympic Games – Yvonne Tousek, Crystal Gilmore, and Victoria Moors (Brooklyn’s older sister).

Padurariu had another stand-out season in 2017, sweeping the podium in all events at both the 2017 Elite Canada and Canadian Championships. Internationally she took home gold on beam, bronze on vault, and was 5th all-around at the Jesolo Cup, and was the silver medallist in the junior all-around competition at the Gymnix Junior Cup in Montreal.

Elena Davydova has the distinction of being an athlete at the Olympics (1980 Olympic all-around champion for the Soviet Union), an Olympic coach (London 2012), and an Olympic judge (Rio 2016). She is also on the FIG women’s technical committee. She and Valery coach out of Gemini Gymnastics in Oshawa, ON.

Before joining Gemini Gymnastics, Valery was the Head Coach of the Lvov Russian Training Centre in Ukraine and was named the Canadian Junior High Performance Coach of the Year in 2005, 2006, and 2010.

By qualifying for the women’s all-around final and floor finals at the 2017 FIG World Artistic Gymnastics Championships in Montreal, QC (where  she finished 15th and 5th respectively), Brooklyn Moors added her name to a prestigious list of 57 other Canadian female artistic gymnasts to have been named “World Class Gymnasts” by the International Gymnastics Federation (FIG). Athletes are named to the list when they qualify for a final at a World Championships or Olympic Games. For a complete list of these athletes, please click here and select “Women’s artistic Gymnastics” and “Canada”: http://fig-gymnastics.com/publicdir/athletes/wcg_view.php

QUOTE: “It’s such an amazing feeling because I never thought I’d be where I am today, so being named that was just incredible.”