QUEBEC CITY, QC (February 2, 2018) – Brooklyn Moors of Cambridge, ON and Rene Cournoyer of Repentigny, QC topped the field in the senior women’s and men’s all-around categories respectively on Friday night at the Elite Canada in Artistic Gymnastics competition taking place at the Telus Stadium in Quebec City, QC. 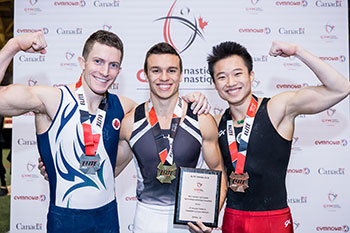 Moors, who captured the world’s attention this past fall at the World Championships in Montreal where she placed 15th in the all-around competition, topped the field as expected with her beautiful floor routine, scoring 14.034 to advance to the apparatus finals on Sunday. She also qualified for finals on vault and beam.

“I’m super thrilled (with this win) because I’ve upgraded all of my routines so we came in today knowing we were going to make mistakes but to just go for it and so I’m super happy with the results,” said Moors who took the title with a score of 54.335.

Ellie Black of Halifax, NS -- the 2017 World Championships silver medallist in the all-around, only competed on the uneven bars at the competition as she rests an injury to her toe. She has advanced to the finals on that apparatus though and will compete again on Sunday.

Ana Padurariu of Whitby, ON was having a phenomenal meet in her debut as a senior, and would have taken the win had not an unfortunate fall on vault, her last apparatus, left her with no score. She finished the night in second with a total score of 54.085 and will unfortunately be out for the rest of the competition with an injury to her foot. Rose Kaying-Woo of Brossard, QC took the bronze with a score of 53.784.

In the men’s competition, it was close throughout the evening between the top three men with Cournoyer, Jackson Payne of Calgary, AB, and new senior Darren Wong of Vancouver, BC eventually finishing one, two, and three respectively. Payne laid down the highest scoring routine of the night on parallel bars with a 14.600, while Cournoyer tied for first on rings, and was first on vault. Wong was the top-scorer on high-bar which seemed to be the nemesis of most of the men with no one scoring over 13 pts.

“I’m so happy. I had such a great day and had a lot of fun. I had a few new routines which I nailed today and my vault was a huge vault and I stuck it which made me really happy,” said Cournoyer who has won the senior all-around title at the last three Elite Canada competitions.

The junior men took to the competition floor earlier in the day and it was another tight battle for the all-around title in the 16-17 age category with David Sandro of Acton, ON eventually taking the win with a total score of 100.434 – just edging Evgeny Siminiuc of Mississauga, ON, who was the all-around champion in the 14-15 age category at last year’s competition. He finished second with 100.405.

In the 14-15 age category for junior men, it was Evan Fedder of Vancouver, BC who took the gold with a score of 90.264. Benoit Tremblay of Gatineau, QC took silver, while Matthew Brown of Dartmouth, NS took bronze.

The competition will finish on Sunday with the junior and senior women’s apparatus finals at 11:00 am ET.