MONTREAL, QC (October 3, 2017) – The Canadian women’s team came out strong in their qualifiers Tuesday night in Montreal at the 2017 FIG Artistic Gymnastics World Championships with Ellie Black of Halifax, NS currently sitting atop the standings in the all-around competition  after the second of five subdivisions, and Brooklyn Moors of Cambridge, ON currently sitting in 7th. 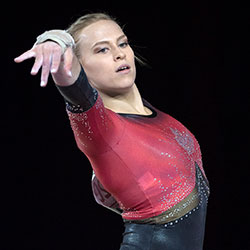 Black also currently sits in first on beam with a score of 13.433, second on vault, third on floor, and 6th on bars and has a total score of 55.766. Elena Eremina of Russia currently sits in second in the all-around with 54.999, and Nina Derwael of Belgium is in third with 53.598.

“It was an awesome day of competition to go in there with these girls, and to experience this competition in Montreal with the crowd cheering us on was awesome. There’s still three subdivisions to come tomorrow so we’ll be waiting until tomorrow to see the rest of the results, but I think we did a really good job and the team is looking to make a few finals,” said Black who finished 7th in the all-around competition at the 2015 World Championships, and 5th at the 2016 Olympic Games in Rio, both Canadian best-ever performances.

World Championships rookie Moors also had a great evening, and besides sitting in 7th in the all-around, also sits second on floor, her favourite apparatus, with a score of 13.896.

“This was so surreal, and I’m so excited because competing in front of my family and friends was such an amazing experience,” said Moors who made her World Cup debut last month and took home gold on the floor exercise. “I did make some mistakes, but I’m happy that I did because now I can work through those and know what I need to do for the next couple of days, or in the future.”

Rio Olympic Games vault finalist Shallon Olsen of Surrey, BC debuted her new Cheng vault, and stuck it to currently sit second on that apparatus behind Maria Paseka of Russia. She also competed on floor where she currently sits 5th with a score of 13.133.

“I’m really proud of my vault because I stuck it, and it’s a new vault for me and it’s upgraded, and just having the crowd behind me made me attack it more so it was a really awesome feeling when I landed it,” said Olsen.

Fellow Rio Olympian Isabela Onyshko of Brandon, MB had a tougher evening, finishing 7th on beam with a score of 12.400 and 18th on bars after having to pause during one skill.

“Overall I was very pleased with the performance of the Canadian girls. We have a blend of veterans and rookies on this team, and I think for tonight, it went as well as it could,” said women’s national team director Dave Brubaker. “I was very pleased that Isabela Onyshko tried some new difficulty on both of the events she was competing on. We knew she had to take a risk to try to make the beam final. She had a really good beam routine going but made a couple of slight errors that prevented her from doing her best performance.”﻿

For complete results from tonight, and to follow the results through tomorrow, visit: http://bit.ly/MTL2017Results