MONTREAL, QC (October 2, 2017) – The Canadian men’s team kicked off the 2017 FIG Artistic Gymnastics World Championships on Monday night in Montreal competing in subdivision three of four in the qualifying rounds. 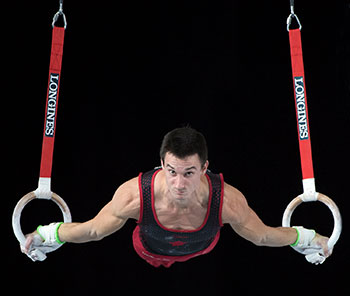 Zach Clay of Chilliwack, BC was the only competitor for Canada in the all-around competition, and is situated well to advance to the finals on Thursday after posting a total score of 78.632 to finish the night in 16th position. The top-24 athletes move on to the finals.

“I did make a few mistakes, but other than that I think it was awesome and I feel good about it,” said Clay who returned to competition at the Canadian Championships this past May after an injury in 2015, and took home the Canadian all-around title. “We’re really hoping I make it in (to the final) and I’ll be competing again. The crowd out there was awesome, my family was there cheering me on, and it’s truly a good feeling knowing that your country is at your back.”

The other top Canadian performance came from Rio 2016 Olympian Scott Morgan from North Vancouver, BC who sits 13th currently in the floor exercise with a score of 14.000. A small step out of bounds cost him a 1/10th deduction. The top-8 in each apparatus advance to the finals.

“I was really happy with my set – you could hear the crowd cheering the whole time and to land and just hear that roar was super exciting. We came up a little short from a final, so we have some work to do heading into next year, but overall, I’m pretty happy with it.”

Morgan also competed on the rings and currently sits in 21st on that apparatus with a score of 14.166.

Quebec athletes René Cournoyer of Repentigny and Thierry Pellerin of Lévis were particular fan favourites with the Montreal crowds. Pellerin, who was competing in his first World Championships, only competed on the pommel horse and was happy with his performance, recording a score of 13.658 to currently sit in 24th on that apparatus.

“I am quite satisfied, because generally in big events, I tend to be more tense which makes me a little stiff with my routines and more deductions. This time it was more fluid. Despite some small mistakes, I'm really happy.”

Cournoyer competed on floor, rings, vault, and parallel bars, recording his best score on the vault with a 14.166.

“Every time it was the turn of a Canadian, the volume increased tenfold. Being at home, feeling all the support of the crowd is inspiring. It makes it much easier to compete. I am really happy to have passed through the day, to have succeeded on each apparatus, and to have performed well in front of the Canadian crowd!”

“We had a handful of nice performances tonight, but the Canadian public deserves better than what we came with tonight,” said men’s national team director Tony Smith. “We have a good group of talented athletes, but we need to work smarter and with more dedication if we want to compete with the best in the world.”

The last men’s subdivision takes place Tuesday morning. The final list of qualifiers will be determined around 1pm Tuesday.

The Canadian women compete Tuesday night starting at 7pm ET which will be streamed live on the Gymnastics Canada YouTube Channel: http://bit.ly/GCGYOUTUBE