GATINEAU (June 30, 2016) – On Thursday, the Canadian Olympic Committee (COC) and Gymnastics Canada named the eight athletes nominated to represent Team Canada in artistic and trampoline gymnastics at the Rio 2016 Olympic Games from August 5 to 21. 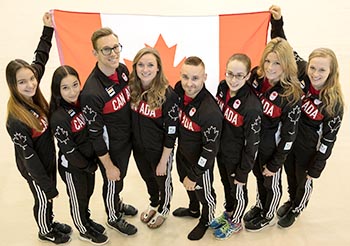 Prior to the Olympic Games, the women’s artistic team will have a final Olympic preparation camp in Sarnia, Ontario the week before they depart for Rio, while Morgan will continue training at Flicka Gymnastics in Vancouver. MacLennan and Burnett have just wrapped up their pre-Olympic competitive season at a series of World Cup competitions in Europe and will now focus on their final preparations at Skyriders Trampoline Place in Toronto.

“I am incredibly excited to be heading to my third Olympic Games. It's always an honour to represent Canada in a sport that I am truly passionate about and to join a team of such amazing athletes and people. Having the chance to share my passion on such a big stage is a dream come true but to be able to do that for a third time, having learned and grown from my last experiences, is really exciting.

“Being named to our Olympic team is so great and I'm proud to be on a team with these amazing athletes. We are going to keep working to improve until the Games and we will do our best to make Canada proud!”

"Six years ago, seeing the 2010 Olympians in my hometown of Vancouver sent shivers down my spine. Now I can’t wait to be a part of the team I looked up to, wearing that maple leaf on my chest, showing the world Canada’s best! We each have a dream and I'm so thrilled I could make mine a reality."

“Canada should be very proud to have these gymnasts representing our country this summer. We all know how competitive gymnastics is at the Olympic level and the talent we are sending gives me full confidence in our ability to compete with the best. Congratulations to everyone that has been nominated to the team.”

“We had some phenomenal results at the London 2012 Olympic Games, and with this group of athletes, who have worked so hard with their coaches and support staff to make this team, I’m confident that once again we will see performances that all Canadians can be proud of.”

“Congratulations to the Gymnastics Canada athletes named to Team Canada today. I join all Canadians, especially our young athletes in gymnastics clubs across the country, in wishing our Olympic gymnasts the very best of luck as they push for the podium this summer in Rio.”

The Honourable Carla Qualtrough, Minister of Sport and Persons with Disabilities

The artistic and trampoline gymnastics team, which will represent Canada at Rio 2016 includes:

Prior to being named to the final Canadian Rio 2016 Team, all nominations are subject to approval by the Canadian Olympic Committee’s Team Selection Committee following its receipt of nominations by all National Sport Federations.