Rosie MacLennan doesn’t see herself as the two-time defending champion in Tokyo, just someone competing for a trampoline medal

She’s a two-time Olympic gold medallist in trampoline but Rosie MacLennan says her past accomplishments won’t matter when she competes at this summer’s Games in Tokyo.﻿ 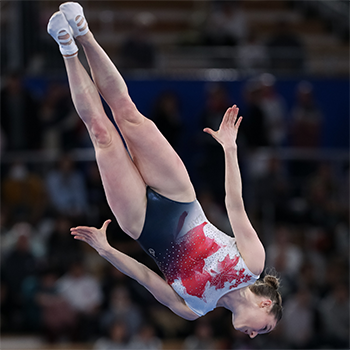 “I think there’s going to be 16 girls who are there, who have been dedicating their lives to this sport, and pushing themselves and challenging themselves to be the best they can be,” said the 32-year-old Toronto resident who trains at Skyriders Trampoline Place with coaches Dave Ross and Marty Myers. “I’m really grateful for the opportunity to be one of those girls.

“A conversation my coach and I had after London was that we didn’t want to go into the next Games as defending champion. We wanted to go in as one of 16 girls, because that way you’re walking in without anything to lose and with opportunity ahead of you. That’s kind of the mentality we took from London to Rio and also the same one we take from Rio to now.”

An advantage MacLennan does carry into Tokyo is the experience she’s gained winning 37 medals, including 18 gold, at major international competitions like the Olympics, World Championships, Pan Am Games, and Pacific Rim Championships.

“With any experience, you can learn from it and take it with you and use those tools for whatever challenges comes up.”

The women’s trampoline competition will be held July 30th at the Ariake Gymnastics Centre.

The one-year delay in hosting the Tokyo Games due to COVID-19 had some benefits for MacLennan. It allowed her to recover from a broken talus (the bone between the ankle and foot) and a fractured heel suffered in April 2019.

“I did take the time with the postponement to allow that stuff to heal and recover and to build back a little bit stronger,” she said.

“For me it was an opportunity to have a huge long training block with no competition, something I haven’t had in my career probably since I was a young kid. I really tried to take advantage of that and just enjoy the training, use that time to experiment, try different skills and see where that leads to.”

“I wanted to learn more about the sports system, how it works and what went into preparing for Games,” she said. “It’s become more important in my mind to ensure that athletes are having a positive experience and to ensure that their perspectives are considered and put at the heart and centre of what the COC and sports organizations do.”

Giving back to sport is important for MacLennan.

“I do think I have in some ways a responsibility to give back to the community, because I have had the opportunity to learn so much and experience so much.”

MacLennan has given some thought to her post-Olympic plans. She would like to start a family with her husband.

“(But) I don’t know exactly what it will bring,” she said.