BRESCIA, ITA (June 5, 2021) – Jérémy Chartier of Montreal, QC laid down two solid routines at a World Cup Trampoline competition in Brescia, ITA on Friday to finish the competition ranked 12th overall with a score of 108.550, which puts him in contention to secure a qualifying spot in men’s trampoline for Canada at the Tokyo 2020 Olympic Games this July. 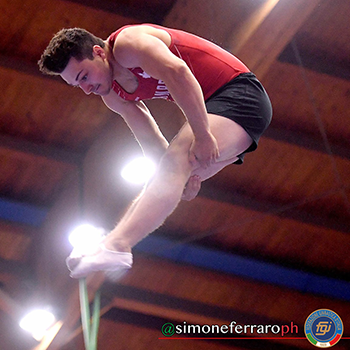 Chartier, who has been training out of the Institute National du Sport (INS) in Montreal off and on for the last year and a half due to COVID lockdowns, was competing in his first in-person competition since February 2020, and scored 50.740 for his compulsory routine, and 57.810 for his optional where he debuted a new 4-triples routine (17.1 difficulty).

“I’m really satisfied (with my result) considering the high stakes and the high level of pressure after this long period without competing,” said Chartier after the qualifiers on Friday. “I would have changed a few things here and there and I would have competed my routines slightly differently, but, overall, I am really proud of my performances, and I’ll be waiting for the official announcement of the Olympic quota spots.”

“Jérémy put forth an excellent effort and narrowly missed qualifying for the final round,” stated Karen Cockburn, National Team Director for Trampoline Gymnastics at Gymnastics Canada. “His perseverance through these challenging times has been remarkable. He handled the pressure of not only his first competition in over a year and a half, but also an important Olympic selection event.  Once the final phase of FIG Olympic qualification concludes we will find out if he has secured an Olympic spot for Canada.”