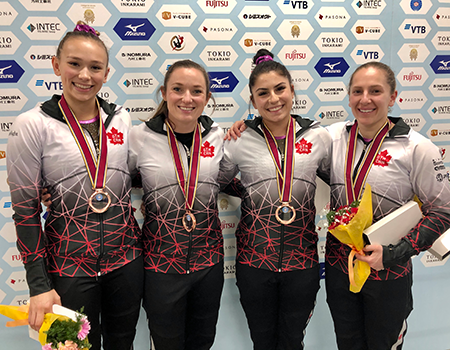 The team had qualified for the finals in fifth position with a score of 305.685 and was able to capitalize on some errors from the other teams to advance to the bronze-medal position in the finals – scoring a total of 133.745 with Smith, Milette, and Méthot competing. The team from Japan won gold with a score of 165.225 while Great Britain took the silver with a score of 162.820.

“We have an amazing team, and it’s been such an honour and a privilege to compete next to them,” said MacLennan, who didn’t compete on Friday as she rests up to compete in the individual semi-finals on Saturday, but who helped the team secure their spot in the team final. “It’s been really impressive to see how much they’ve improved over the last few years, and I think all of us go out, and have fun in training and just support each other. It might be an individual sport most of the time, but we definitely approach it like a team.”

“Today went really for us,” said Soehn. “This was my first-ever team final at a Worlds so I had so much fun and I’m really proud of all us.”

Smith teamed up with Rachel Tam of Toronto, ON in the women’s synchronized trampoline qualifiers earlier in the day and finished in sixth place with a score of 87.630, moving them on to the finals on Saturday evening. Méthot and Milette of finished the day in 19th with a score of 77.640 following some synchronization issues in their optional routine.

“Today went really well. We’re really happy with our first routine especially. We had the highest score going in to the second routine and we weren’t expecting that so it was a great surprise,” said Smith who together with Tam won a bronze medal at the last World Cup competition in Spain. “For the final, we’ll up our difficulty to give us the best chance to make it on to the podium."

Keegan Soehn of Red Deer, AB and Nathan Shuh of Elmira, ON were the top finishers in men’s synchronized trampoline, scoring an 89.690 to finish in 13th putting them as the second reserves for the final on Sunday. Jason Burnett of King Township, ON and Jérémy Chartier of Montreal, QC had a tough day, not completing either of their routines, and finished in 34th.

In the men’s tumbling qualifiers, Jon Schwaiger of Ancaster, ON was the top finisher, placing 16th overall with a score of 68.400. Antonio Fernandes of Calgary, AB, who was competing in his first World Championships, and will also compete next weekend in the World Age Group Competitions in both tumbling and DMT, finished 29th with a score of 64.700, while Callum Sundquist of Sherwood Park, AB finished 30th with a score of 64.400.

“I think today went pretty well,” said Schwaiger who will now compete in the all-around team final as the men’s tumbling representative on Sunday. “After following some of the scores from the first round, we decided to take it a little bit easier with the first routine, and then I put down two passes that I’m pretty happy with to round out the tumbling competition for today.”

Saturday will see Soehn compete in the men’s individual trampoline semi-finals, while MacLennan, Smith, and Milette will all compete in the women’s semi-finals. The top-8 from that competition will advance to the finals on Sunday. In finals action will be Mario Bruno of Kamloops, BC competing in men’s DMT, and Smith and Tam competing in women’s synchronized trampoline. The competition will wrap-up Sunday with Miller-Burko competing in the women’s DMT final, then the individual trampoline finals, followed up by the team all-around competition.