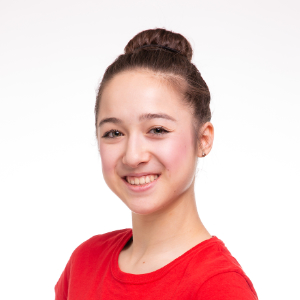 Sophie has had an impressive 2018 season. In her first year as a senior, she captured the senior all-around title at both  Elite Canada and the Canadian Championships. She also represented Canada at the 2018 Commonwealth Games in Gold Coast, Australia and won a gold medal for her clubs routine - one of only 15 Canadian athletes across all sports to win gold at the Games. She will make her World Championships debut in September 2018.

Getting into the sport: After watching rhythmic gymnastics during the 2008 Olympic Games, Sophie really wanted to try it…Ribbon is what captured her attention…Sophie’s parents had no idea what RG was but they found the pre-elite program at Seneca…The next year, she moved to Jusco when the Seneca program closed.

Outside Interests: Sophie enjoys playing piano and has been playing since she was 6 years old... Sophie excels in all subjects at school, but her favourite subject is math.